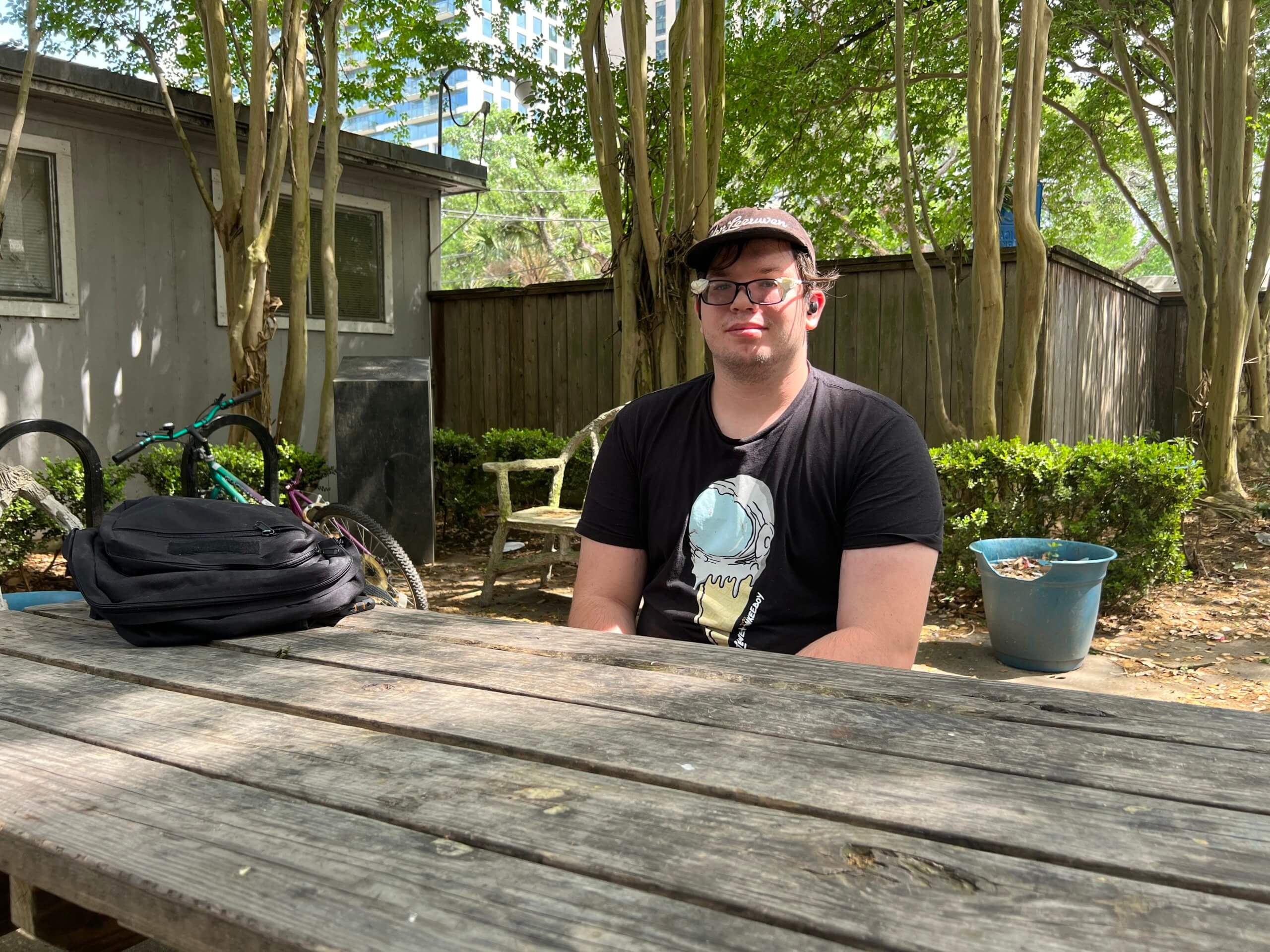 With these questions, Eric highlighted how common these cases are while being specific to his journey in becoming vulnerable to homelessness. Alcoholism affects both of his parents; his mother also struggles with mental disabilities and post-traumatic stress disorder.

Eric shares his story with the people he meets in hopes of dismantling the idea that discussing the reality of homelessness is taboo.

“Youth homelessness, it’s not supposed to exist, but it does. Telling my story shows people that this is a problem, especially among young people,” said Eric, “There are so many homeless youth in our community. I feel it’s important to share my story to hopefully gain resources and spread awareness for people in my situation.”

Eric first learned about Covenant House Texas during his stay at Texana Center, a behavioral healthcare clinic in Fort Bend, and figured the shelter appealed more to him than the alternative of joining a group home.

A resident at The Covenant House Texas  Safe Haven program since January 2022, Eric is already planning his move into the Rights of Passage (ROP) program, a transitional living program that will address his long-term needs to live independently. He admits that in the past, he was a shy person, but now he feels optimistic about moving on to ROP and meeting new people, sharing that being at Covenant House Texas has inspired him to open up about his experiences and make steadfast friendships.

As he comes out of his shell, the first thing many may notice about Eric is his eagerness to help others. He is frequently seen on campus lending a hand to someone moving their belongings in or out of the shelter or offering to play video games with a new resident.

“I know what it’s like to be alone and not have someone willing to help you,” Eric explains, “I don’t want anyone to suffer the same fate I did. I want to be the kind of person that always lends help when someone needs it.”

Eric’s future plans include enlisting in the U.S. Army before pursuing higher education. Inspired by those that have helped him and his peers, he is also considering a career in behavioral sciences.

Reflecting on his time at Covenant House Texas so far, Eric adds how grateful he is for the unwavering support of the staff and the resources that have enabled him to take steps towards complete independence. He’s even been able to secure a job at a local ice cream shop, Van Leeuwen, where he enjoys satisfying his sweet tooth on occasion and engaging with customers, often insisting they try his favorite flavor, “Vegan Churros & Fudge.”

The practical benefits of being at Covenant House Texas have enabled Eric to look forward to his future, knowing he has the resources and the fundamentals learned here to fall back on. Equally as important is the boost of confidence he feels from becoming more outgoing and making lifelong friendships with his fellow residents.

“Just keep your head up,” Eric offers as advice to youth like him, “Things will get better. The staff at Covenant House Texas is always willing to help with whatever you need, and you can always reach out.”