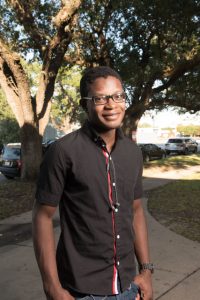 Hakim came to Covenant House Texas in May of 2016, fleeing an abusive home environment. Despite the challenges he faced, Hakim graduated from Thurgood Marshall High School with a 4.5 GPA. He was accepted to Howard University, Prairie View University, and the University of Houston. Hakim initially decided to attend Howard but faced several roadblocks as he prepared to leave for the private, out of state university.  He has spent the last year working hard and with the support of Covenant House Texas staff, he was accepted to the University of Texas at Austin and as of winter 2018, he’s an official Longhorn. Hook ‘em Horns!

“With the help of Covenant House, I feel good about myself and my goals. I’ve received mental health treatment, which has helped a lot, and medications to be more productive. My RA has helped me overcome the fear of failure. I’ve also received help with financial aid, getting into school, and finding my job. I’ve worked at Forever 21 in the Galleria for the last year. This program really works. If anything, there need to be more programs like this in other cities around the United States. When I left my home, my biggest fear was being on the street. I thank all of the staff here, the board, and supporters of CHT for truly helping me in my life.”

Two members of CHT staff drove Hakim to school. Lead Resident Advisor, Shawn Zanders, and Resident Advisor, Romana Retiwala helped him get situated in his dorm. Hakim plans to major in English. He wants to become a writer/journalist. Hakim is driven, determined, and will accomplish great things in the future.