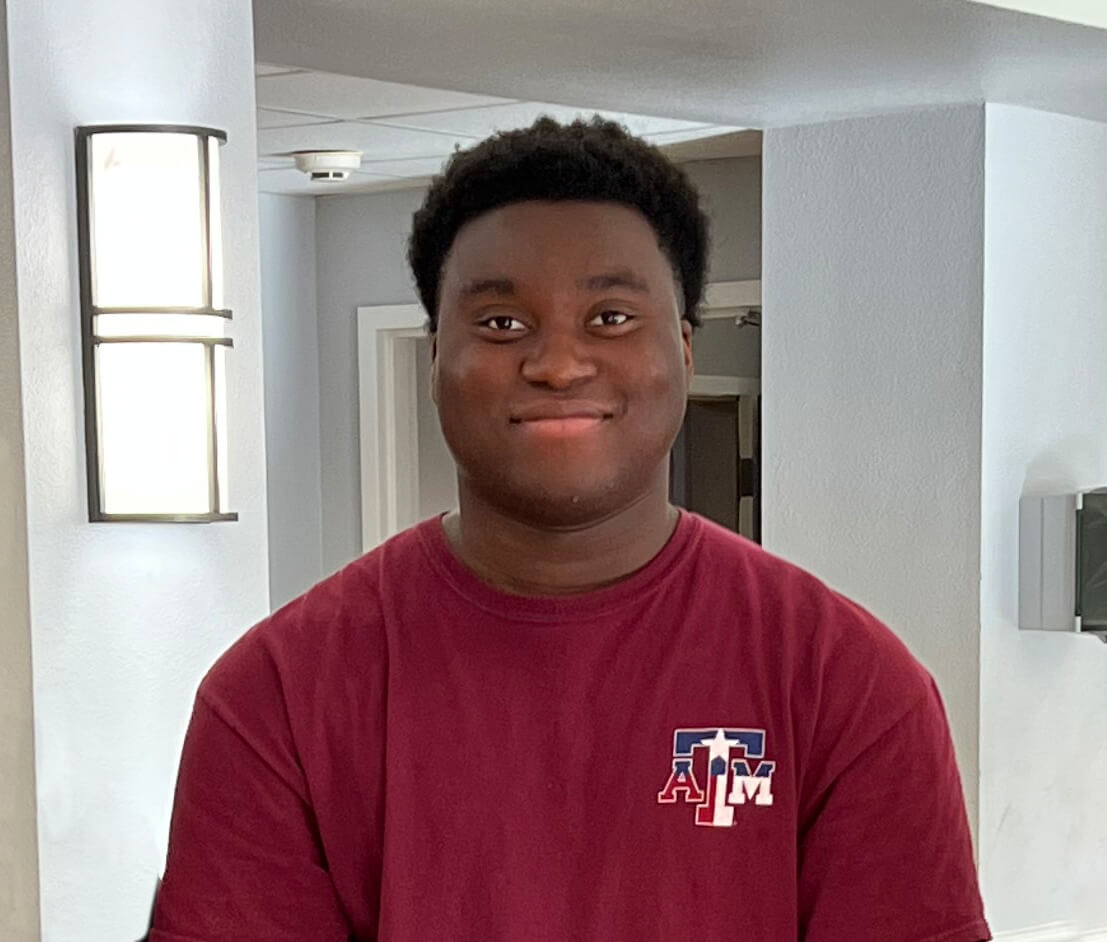 Soon-to-be Covenant House Texas graduate, Chijioke, has had an extraordinary 22 years of life. Since boldly coming into the world as one of eight babies, he has manifested his talent for engaging with people and animating a room into a future in acting.

At 19-years-old, Chijioke spent his days as a full-time community college student, pursuing theater and, like many, looking for a job to support himself. However, with no stable housing, his nights were spent sleeping on campus until a security guard recommended Covenant House Texas as a safe place to go.

Once he settled in as a resident behind our doors, he had no problem shooting for the stars. He managed his schoolwork – often taking six to seven courses per semester – while working 20 hours a week at a neighborhood tea shop.  Despite the unprecedented number of layoffs at the height of the pandemic, Chijioke’s work ethic and customer service skills made him a valuable asset to his job, allowing him to keep his position until he graduated.

Chijioke is grateful to have learned money management tips from the Covenant House Texas staff he has come to know as family. He even took the lesson of residents saving roughly 30% of their earnings and made it more challenging. He admitted he has been saving 50% of his earnings since arriving at the shelter.

“It’s nice to have something to take out in emergencies,” he said, humbly unaware that this level of saving is no easy feat for most 22-year-olds.

Learning the steps to financial security is invaluable, but Chijioke knows that one of the most essential things Covenant House Texas did for him completely changed his perspective. He has often felt beaten down and far removed from attaining his dreams.

“Being here has changed my mindset. I cannot give up. I have to go and follow my dreams to satisfy what’s going on inside me,” he said. “Homelessness can be a big umbrella word for failure. I had hit rock bottom and couldn’t go any lower, so I can only keep going up.”

Chijioke has taken this momentum and used it to apply and audition to some of the most prestigious theater programs in the country. In January 2022, he braved the northeast snowstorm to audition in New York City. In a different state and under the pressure of auditioning, he faced every traveler’s nightmare: his hotel had mistakenly charged him twice. Instead of buckling under the stress, he was grateful to fall back on the financial literacy he gained at Covenant House Texas and call his bank to get everything sorted without becoming stranded in a new city.

On the cusp of his future, he reflects on the many youth facing homelessness, like he once did, in places like New York City. It caused Chijioke to think about how there are places with harsher winters than here in Houston and how those he can relate to will ultimately become homeless.

“Being at Covenant House during the 2021 winter freeze made me realize how blessed I am,” he said. “It’s a blessing to be here with a place to stay and not have to worry about what the next day will bring.”

His empathy runs deep for other youth who become homeless while chasing their dreams or falling on hard times. He stated that he will know he has “made it” in his career when he is able to help others who have been in his situation.

“I want to be able to do everything that’s been done for me, and more.”

As he steadily marches ahead through college applications and theater program auditions, the staff at Covenant House Texas supports him at every turn. Through financial aid applications, the education advisor works to ensure Chijioke does not have to drain his savings to get into the school of his dreams, refusing to let the talented young man feel limited to what he can reach for.

When Chijioke graduates from Covenant House Texas, he knows it’s the start of something new, and his Covenant House support system will be there to send him off for a bright future.